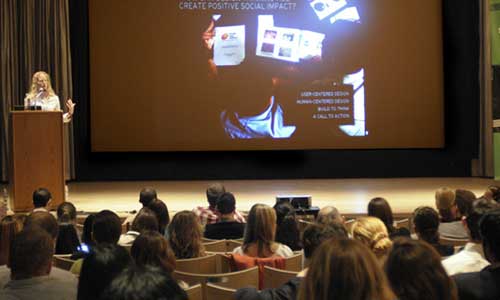 The Feast was a day-long social innovation conference that took place on Thursday, October 16th at Scandinavia House in New York City. There were 12 presentations and summarizing each one would make for a very long article, so I’m simply going to touch on twelve interesting things that I learned:

1) Dr. Dickson Despommier from Columbia University discussed sustainable farming in urban areas. As strange as it may sound to fill buildings in crowded cities with vertical farms, Despommier makes the point that in order to eat locally, we need to integrate agriculture into the city landscape because urban centers are where people are moving.

2) Tom Szaky, founder of Terracycle and one of the most dynamic speakers of the day, pointed out that "there is no garbage that cannot be upcycled to be made into something else."

Ever since he started packaging plant food in old soda bottles (not recycled bottles, actual plastic Pepsi bottles), he has been seeking out opportunities to match what some people waste with what others want. His ultimate goal is to make garbage a commodity with a positive value (and considering that 99% of what we consume becomes garbage in six months, the goal couldn’t be timelier)

PS – those reusable bags sold at grocery stores are even worse for the environment than the traditional plastic ones. It would take 41 regular plastic bags to equate the carbon footprint of one of the reusable ones.

3) Joshua Onysko of Pangea Organics spoke about his first scribbled down business plan, which read: "Make Soap. Sell soap. Fund Non-profit." His soaps (which I’ve used without even realizing it) are made of biodegradable cardboard containers that, if planted, will produce trees (I didn’t know that either). The proceeds support Women for Women International, an organization that helps women living in conflict regions that are victimized by war and community violence. It’s not often you see a male CEO spending his money on a women’s organization, but if you heard Joshua’s life story, you’d realize that he’s not your typical CEO.

4) Robbie Vitrano from Trumpet talked about New Orleans as America’s social innovation laboratory. "If you’re going to rebuild," he said, "you might as well do it right." His website offers a number of ways to get involved with rebuilding New Orleans, and he mentioned a contest offering an $100,000 cash prize to the entrepreneur who can best help retain young talent in New Orleans.

5) Elizabeth Johansen from IDEO asked us to consider where ethics meet consumerism by shifting our energies from creating a need to designing for existing needs. She cited Bank of America’s Keep the Change program as an example. She also encouraged us to fail often to succeed sooner.

6) Scott Belsky of Behance gave a thought-provoking talk about what it takes to make good ideas happen. A write up of his ten points can be found here.

7) Dale Jones of PlayPumps International told us about a very simple idea: water pumps that double as merry-go-rounds that bring clean drinking water to underserved African communities. As the video stated: "Sometimes it is the simplest of ideas that can change the world most profoundly."

8) Piers Fawkes of PSFK gave an inconclusive presentation about trends. He mentioned a range of collaborative projects on the web that most of us don’t know about in order to demonstrate the breadth of the web community.

9) Summer Rayne Oakes of SJR discussed why salmon swim upstream. Two interesting points she made were:

10) If We Ran It‘s Michael Romanowicz and Marissa Shrum talked about the brand new hustle, whereby tools like the Internet help us pool our resources together to find innovation solutions.

11) Jose Serrano-Reyes ad Seth Aylmer of Fame Game explore why and how people become famous. By mapping New York City scenes, they hope to convey the cultural climate with greater transparency. (I’m not really sure what that means either.) The end result is a reallocation of the money that pays for celebrity appearances to socially conscious initiatives.

12) Chad Rea of ecopop gave a cool, casual talk entitled "Tomorrow Will be Opposite Day." ecopop is a bazaar of interesting ideas in the realm of advertising, media, music, transportation and technology, to name a few. But Rea’s talk had more to do with negating the following five commonly heard phrases:

In closing, there are creative ways to use existing resources (Pepsi bottles, bath products) to make the world a better place. And in order to succeed we must fail fail fail. It makes sense when you think about it; all of the day’s speakers took the road less traveled . . .