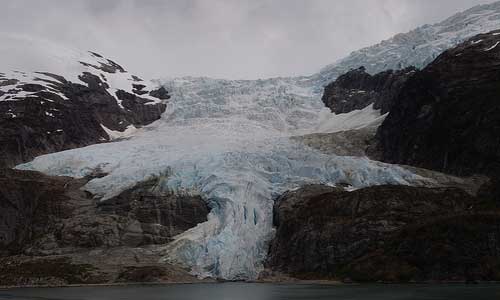 The Ghawar Oil Field, located in Saudi Arabia, is the world’s largest known oil field at approximately 170 billion barrels. Arctic Ocean reserves may be more than twice as large.

This reserve, estimated at 400 billion barrels, derives from the Paleocene-Eocene thermal maximum (PETM) of 55 million years ago, when most of the earth was tropical. During this geologic era, the Arctic was home to crocodiles and palm trees. Huge, floating mats of prehistoric fern covered its ocean. When these ferny mats decayed they left behind "black gold," that gooey, combustible substance coveted by industrialized nations worldwide. Global warming is melting Arctic ice. In as much as 20 years, or possibly as little as 10 (according to the latest Arctic Climate Impact Assessment), the entire Arctic could be ice-free for months at a time, making its petroleum deposits ripe for the plucking as oil-starved nations, facing the end of oil, scrabble for the last, easily extractable fossil-fuel deposits.

In 2004, researchers collected drill samples from the Arctic Ocean’s floor. The results, published in the journal Nature in 2006, tend to confirm the estimates. Jonathon Bujak, one of the authors and now a consultant for AOAG, formerly worked for PetroCanada as a petroleum geologist. Bujak, a geoscientist, will be the keynote speaker at the Canadian Society of Petroleum Geologists in Calgary in May, 2008.

AOAG recently filed a claim with the United Nations (UN) to act as the sole developer of this new petroleum reserve. The filing has profound implications for the future of international relations. Portions of the Arctic Ocean are currently outside the territorial control of Canada, Russia, the U.S., Norway, and Denmark – nations on the rim of this reserve. AOAG’s preemptive move has these nations scrambling to establish scientific claims under Law of the Sea conventions established by the UN. Retired British Columbia senator Edward Lawson sits on the board of AOAG. Lawson is currently suing the Vancouver (Canada) Sun over an article written by investigative reporter David Baines, which unraveled AOAG’s origins and finances, revealing that Lawson, a former top-level Teamster who once faced racketeering charges, heads a company with no real revenue and only $27,172 worth of assets. Lawson says the article is defamatory. AOAG, which began life as Bulldog Financial Inc., bought a 30-percent interest in the Arctic Ocean "commons area" in the names of three other private corporations (United Oil and Gas Consortium Management Corp., NV, Strategic Nine Corp., NV, and Sterling Oil and Gas, New Zealand). Sterling, along with Kelvin Williams, was a director of the former two and presumably owner of the latter. Sterling became president at Bulldog, which then changed its name to Arctic Oil & Gas. Canada has dismissed AOAG’s claims, but legal experts are alarmed by the company’s actions, saying they could wreck any chance of protecting the Arctic environment. AOAG’s CEO Peter Sterling protests, saying the company acknowledges the reserves as a common heritage, but extraction will require a management company (read AOAG) to align the objectives of the participating oil companies to insure an environmentally responsible and even-handed recovery. This market model, in which oil corporations are exempt from reporting at the helm of recovery efforts, is what concerns the experts, who would prefer to see recovery conducted under international legal statutes, which are both broader and stronger than individual nation’s provisions. The European Union is also concerned. A report issued during the Brussels summit (March 13/14, 2008) warned EU members to prepare their military and civil forces for failed states, mass migration, political radicalization and energy wars – this latter recommendation is directed specifically at Arctic oil reserves. A former U.S. Coast Guard Lieutenant Commander, Scott Borgerson, also warns of possible armed conflict between the U.S. and Canada over Arctic sovereignty. "The United States should not underestimate Canadian passions on this issue," Borgerson wrote. "Unless Washington leads the way toward a multilateral diplomatic solution, the Arctic could descend into armed conflict." Arctic warming is an ecological nightmare, threatening a delicate, regional ecosystem and potentially tipping the balance for the planet’s survival. Exploiting Arctic oil reserves will be like giving a shot of arsenic to a dying child. The U.S. has twice (2005 and 2006) voted to drill in the Alaskan National Wildlife Refuge (ANWR), on the edge of the Arctic, and twice been defeated by responsible senators. In 2008, Alaskan senators – who appear to care less about their constituency than the possibility of oil riches – again prompted a vote for drilling. Will our conscience, and the conscience of the world, allow us to leave this final area untapped and move forward with alternative energy, or will we be driven by our desire for "stuff" to despoil one of the last, pristine wildernesses left on the planet?

Disclosure: I don’t own AOAG stock.