This morning at my local West Village organic coffee shop after my run but before my a shower, I had raging discussion about inflation and GDP data with one of my coffee shop friends. Suffice it to say there was a bet about BLS data and I won a free cup of mud. But in the process I went to his blog and discovered something wonderful. I love it when non-professional economists write something salient and newsworthy. Craig Blitz, in his personal blog write that because inflation is underreported (I’ll let him explain why) that we are actually finding ourselves in a recession sooner than the press and everyone else thinks. 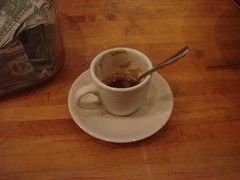 How is GDP (Gross National Product) calculated? First, you take the total value of all transactions in the the domestic (forget exports and imports) economy. Figuring out the value of all transactions is no easy feat but economists do it. They even include an estimate of the underground (cash/illegal/clandestine) economy. But that number grows every year because of inflation. So to get to the REAL GDP growth (the one they talk about on TV), government economists subtract (divide and subtract, but don’t let that confuse you – it’s basically the same) an inflation calculation called the "GDP deflator." This GDP deflator is exactly the kind of inflation index that Craig Blitz thinks is underreported and miscalculated.

Give me an example of what you mean, I’m getting confused. So GDP grows by 5%, inflation is reported as 4%, therefore we have a 2% growth rate, and the president, politicians and media can say the economy is rolling along just fine. But if the inflation number is actually 6% then we have a contraction (negative growth) of -1% and that means recession. Then all those politicians look bad. The media always looks fine because nobody remembers what they say anyway.

That’s great David, what am I supposed to do with my money? Well, long term (10-30 years) stocks and real estate are the best inflation hedges. Short term? I would normally say foreign currencies, but I think the dollar decline has gone too far and is due for a bounce so I’d just stick to stocks and cash.

Disclosure: I own inflation indexed bonds, real estate and stocks.

Above Photo by David Neubert via flickr of an actual Grounded Coffee and Tea espresso.