Photo:phauly, Creative Commons, Flickr
Picture the Middle East, and you’ll most likely picture the persistent, drawn-out Palestinian-Israeli violence that has come to typify the region. 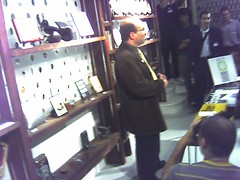 Now remove the political bureaucracy and the militant extremism, the long-held grudges and the sensationalism of the popular media. You’ll find yourself left with a moderate group of civilians who happen to live on a political and spiritual fault line. Two communities, not dissimilar to each other, that simply want to live free of fear.

Now picture these people, one million in number, signing a mandate for peace. This is the vision of OneVoice.

I attended a OneVoice event last night at a distractingly cool, art-filled ad agency called think tank 3 in Manhattan’s West Village. The host was Craig Newmark of craigslist. The reason for Craig’s involvement, as Arianna Huffington explained, is that "[Craig] always finds the most important thing going on and gets involved in that." 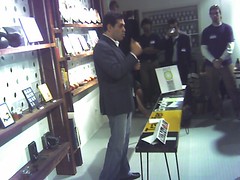 is the latter. Lubetzky, whose bio is too lengthy and varied to summarize, found his calling organizing grassroots means for peaceful coexistence in the Middle East. His latest project, the "People’s Summit," involves an unprecedented number of Israelis and Palestinians congregating simultaneously in two venues on October 18th in a show of solidarity for a two-state solution.

Lubetzky spoke of the power and responsibility that we, as citizens, have to end this conflict, and of the importance of empowering the moderate majority. "This is about . . . achieving a tipping point where we will be loud enough that politicians will listen," he explained.